Peter and Max in front of the bakehouse

How did the bake house come to Ulm-Jungingen? In former times it belonged to the Ulm bread museum at the Galgenberg. When the museum moved at the beginning of the 90tiesto the city of Ulm there was no longer room for the bake house. The local history association took advantage of this situation and moved the bake house to the community centre. In order to bake with a little bit of comfort some modifications were made. An ash box was built in, the whole bake house was made a little bit bigger with the help of the stones of the old wall of the cemetery, a new gable was built and the roof renewed after the old one burned down. A baker donated an old special kneading machine which still works to the local history association. With this machine the bread dough is made. The box on the left side contains bread dough for 25 loaves.

In the bake house the procedure is as follows: – fire with dry beech wood which is two and a half years old and pine wood
– after approx. 2 hours the ash and the smouldering wood parts are removed into the ash box – then the base is wiped with a wet piece of cloth
– swept again
– the right temperature is checked with a newspaper laid on the base, it should change to a light brown colour but should not burn

Now the “oven” is ready.

Meanwhile Peter has got the large box with bread dough and his tools. They can start now. Max turns the “bread spoon” in the oven and the loaves are baked. After 20 minutes the loaves have to be removed from the bottom of the oven and are baked for another 35 to 40 minutes. Then they are ready. In the air there is a delicious smell which is immediately recognized at the kindergarten and the school nearby. The bread is then wetted a little bit and immediately the children run up and get a taster. In summer, usually on the last Friday before holidays, there is a big party – the so- called “Backhausfest“.

There is a short video available on youtube. Enjoy it. 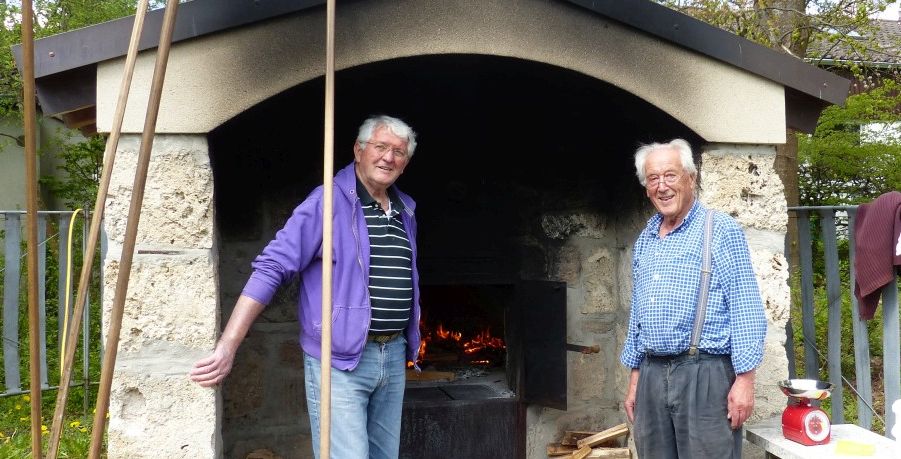